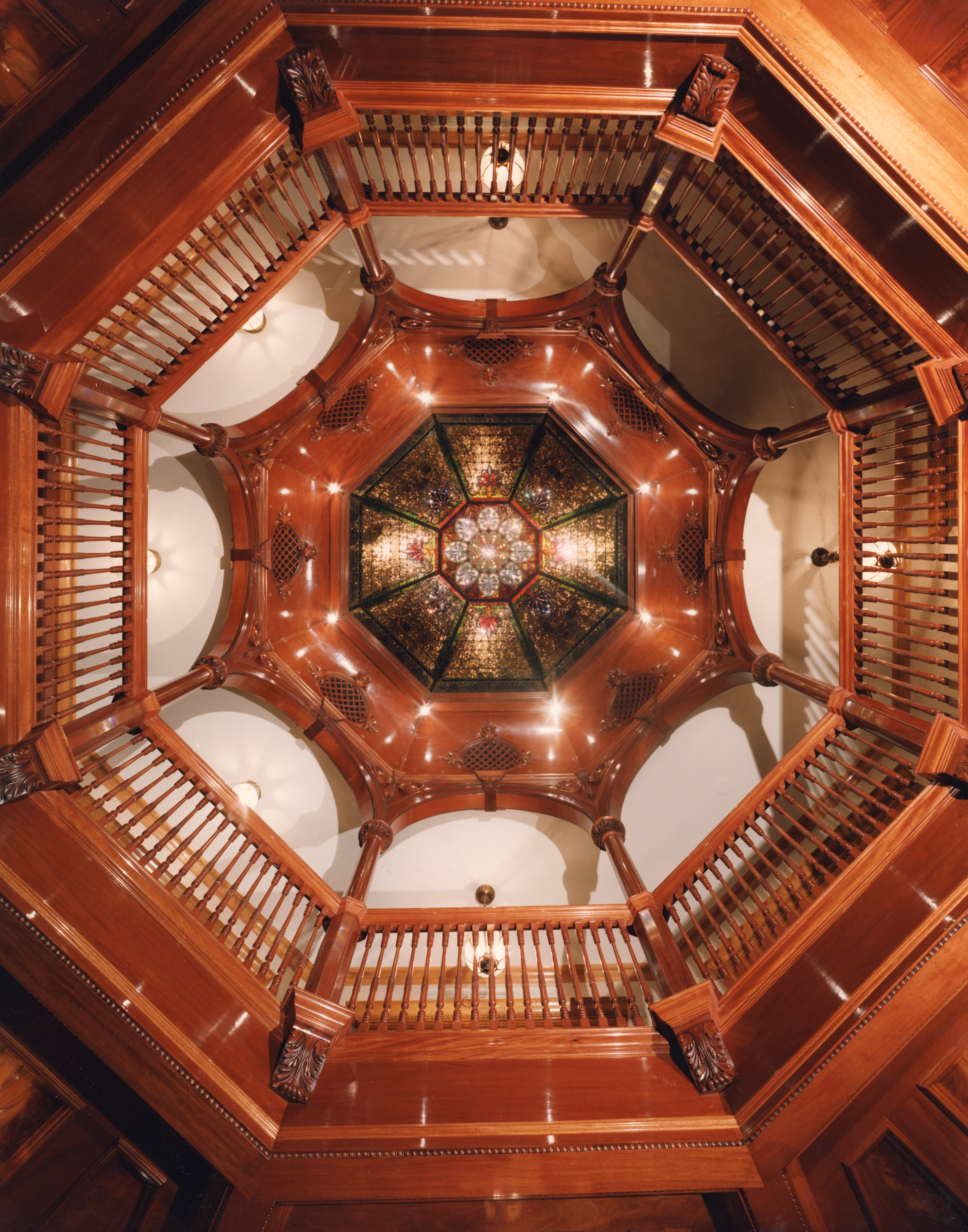 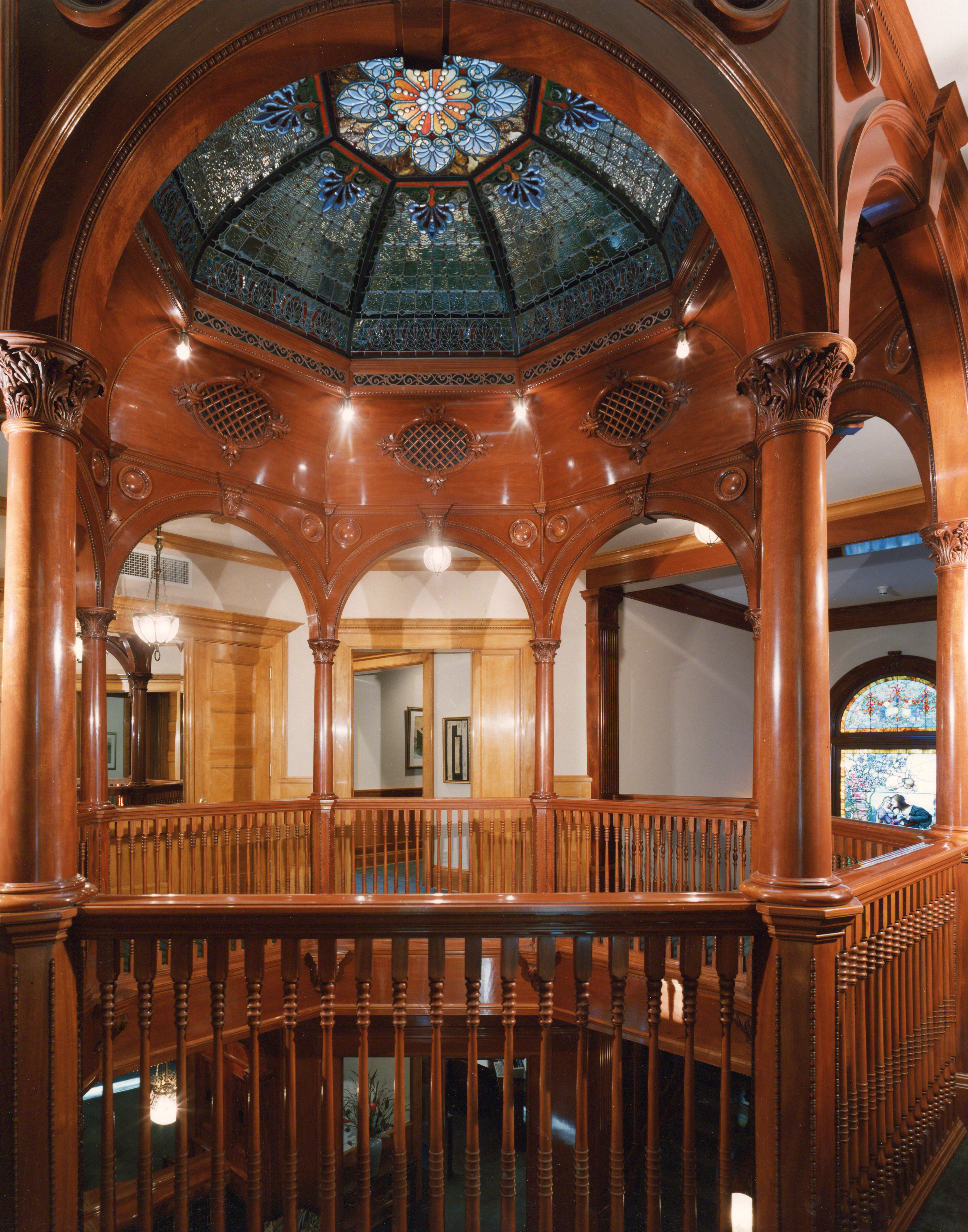 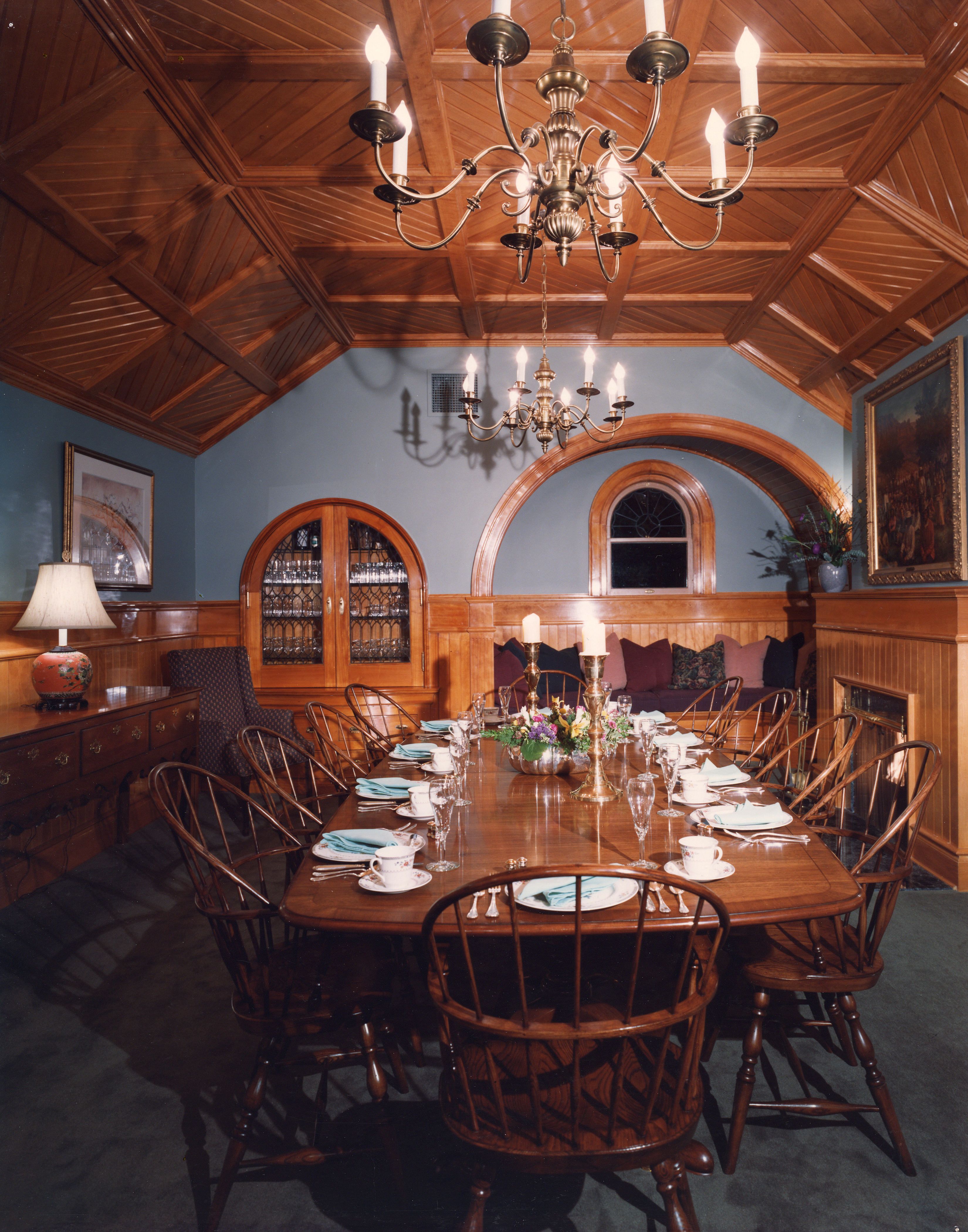 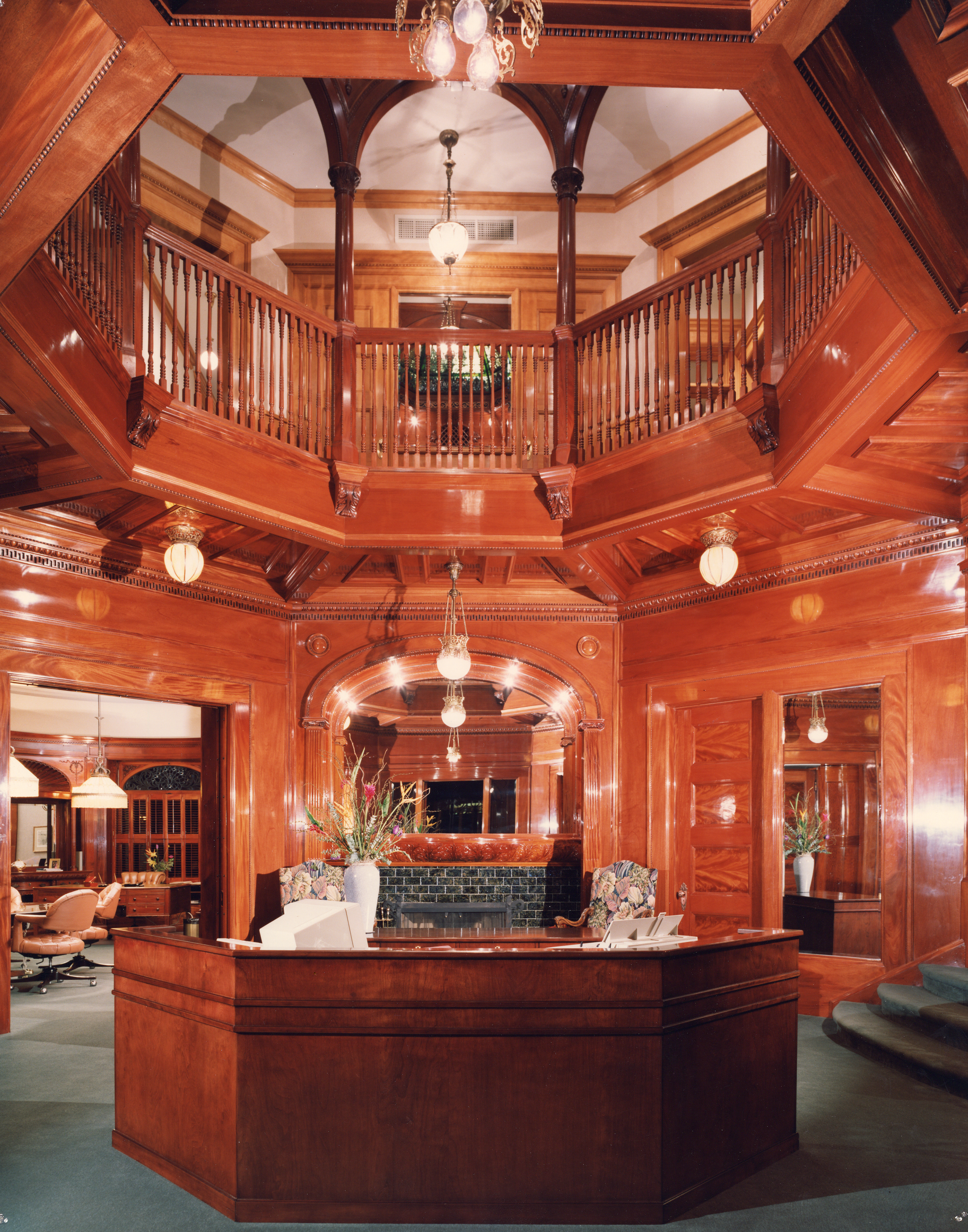 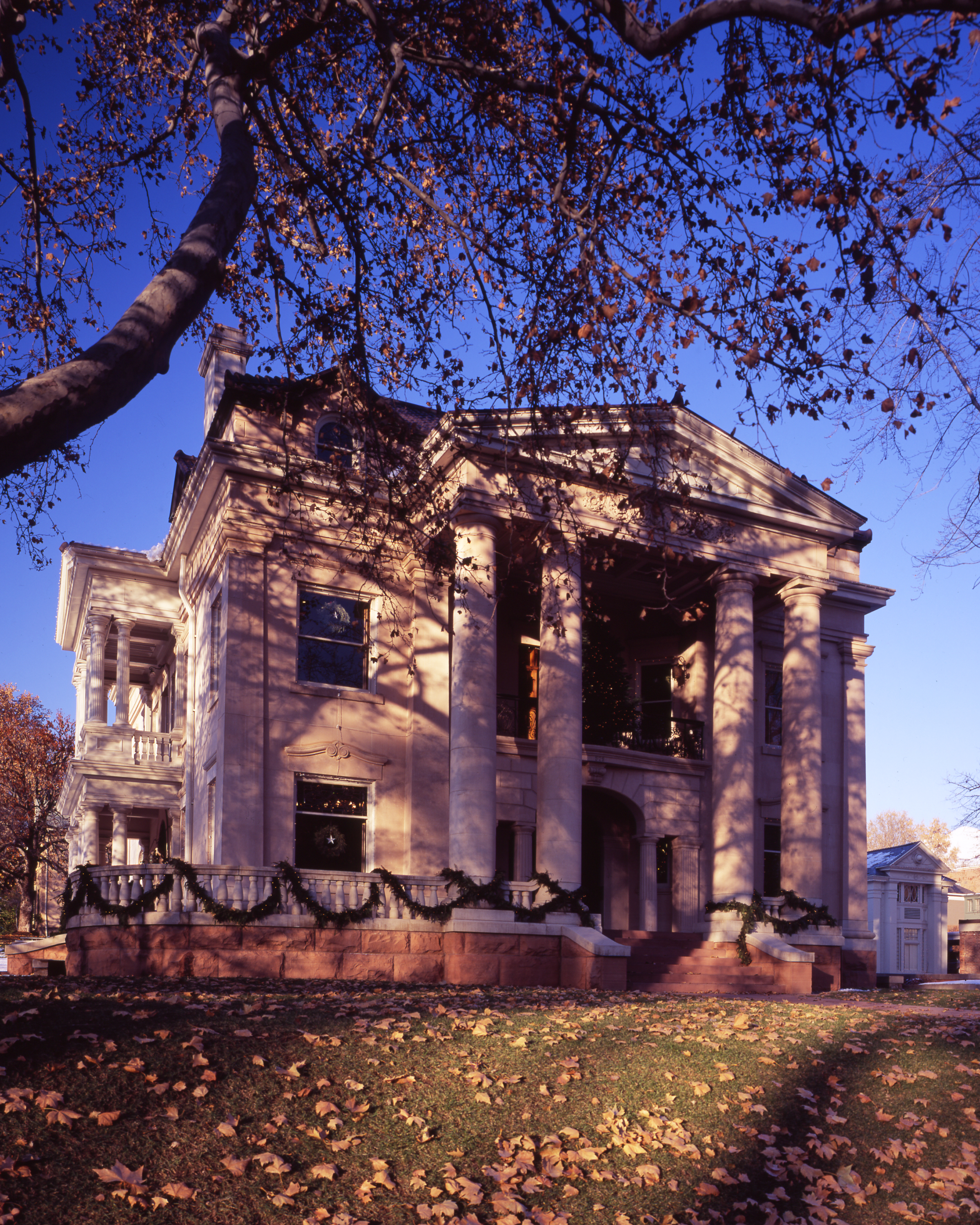 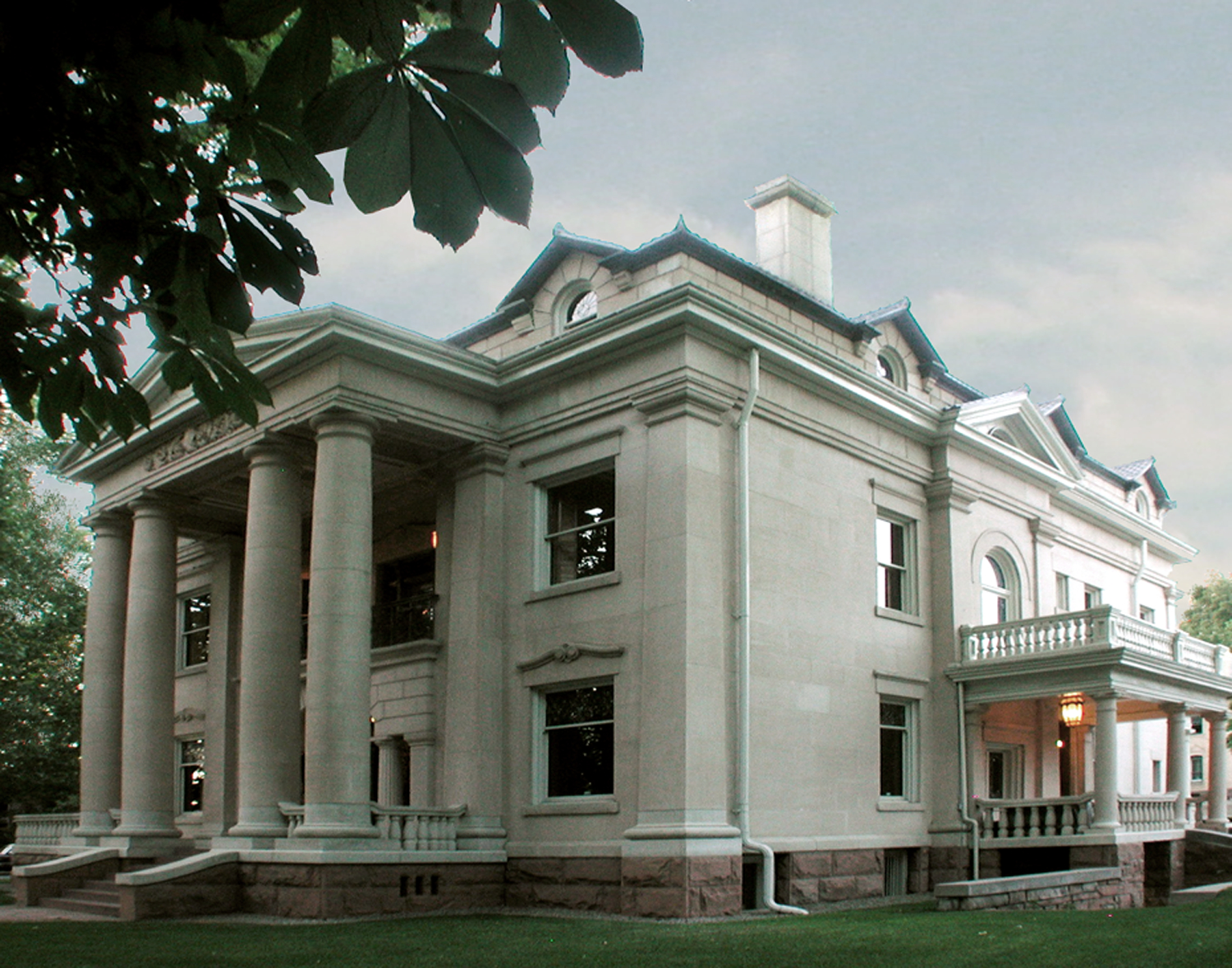 Project Description:
Considered by many to be one of the most architecturally significant buildings of this region, this turn-of-the-century mansion was nearly destroyed by fire in 1986.

Its restoration took nearly three years and resulted in a critically acclaimed restoration project. Since major portions of the interior were destroyed, considerable attention was paid to documenting the finishes in order to properly re-construct both the interior and exterior with historical accuracy. The range of finishes is very broad as is typical for a building of this period. Thorough research produced sufficient data to conclude historic wood finishes. Existing photographs proved essential to the rebuilding of the large stained glass dome and the identification of wood veneer patterns in the main rotunda and stair. Flamed, crotch-sawn mahogany veneer flitches closely matching the originals were located in Indiana. These veneers were laid-up to replicate this most characteristic feature of the Mansion. Carved wood elements were recreated using the charred object as a model. Nearly eighty-five percent of the glass in the dome is original due to early salvage interventions by our design team. A most exhaustive and exacting building deodorization procedure resulted in an odor free environment, difficult to achieve with seriously burned buildings. y The very level of craftsmanship exhibited by the large team of restoration artisans engaged in wood joinery and fine carving, art glass, hand-rubbed shellac wood finishes, gave re-birth to this architectural treasure.

Through the commitment of the Mansion’s owners to preservation, continuing restoration efforts are ongoing, which has resulted in the complete restoration of the main south porch and colonnade. Through a very innovative procedure, the badly deteriorated base stones were replaced while the upper column and porch were temporarily held in place without displacement. The original roofing had been replaced with asphalt shingles in the late sixties, and research showed that the original pressed metal shingles were still available. The roof restoration was completed and other waterproofing issues inherent in the original design were corrected. The west and east porches were due for restoration, including the repair and restoration of tesserea tile floors on all porches. Site improvements continue to be made to better integrate the Mansion with its immediate dependency, the Carriage House. The current landscaping is the result of a dramatic reduction in planting and the implementation of a gravel bed at the base of the building to alleviate water at or near the Mansion’s stone base. Exterior lighting was accomplished by locating light sources high in the surrounding trees which give the entire building a gentle warm glow, like the effect of bright moonlight. Another post-fire project involved updating the entire mechanical system and removal of major equipment from the Mansion to an underground vault located north of the building.